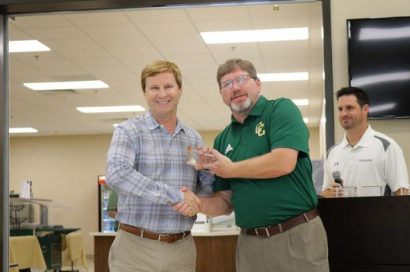 Steve Johnston is a member of the Cedar Creek Class of 1977. He is the son of Mrs. Joann Johnston and the late Dr. Jerry Johnston; a Cedar Creek School Founding Family. Steve began his Cedar Creek journey when the school opened its doors the fall of 1970. During his high school years, he was elected as Class Handsome all four years, Most Athletic Senior, National Honor Society, a three-year member of Varsity Singers, Honor Roll. His senior year he was elected Head Boy and Mr. Cedar Creek. Head Boy is todays equivalent of Student Council President.

Steve’s exceptional athletic ability allowed him great success in multiple sports. His accomplishments include the following:

In 1976 his season rushing record includes;

Steve and his wife Kim have two daughters, Ayla – 17 and Elle – 15. We welcome the Johnston family and friends and congratulate you as an inaugural member of the Cedar Creek School Athletic Hall of Fame.